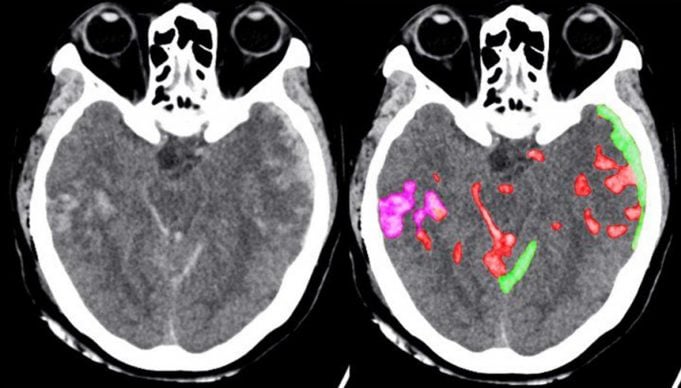 Artificial intelligence can greatly help diagnose bleeding that is not immediately visible. This is what emerged from a joint study by the Californian universities Berkley and San Francisco, which have created an algorithm that can detect brain bleeding with a precision better than 50% of radiologists tested.

In practice, artificial intelligence is able to diagnose a brain hemorrhage better than two of the four radiologists who took part in the test. This happens not because they are incompetent doctors, on the contrary: the AI ​​manages to examine the results of the TAC, or Computerized Axial Tomography, with a precision that reaches the single pixel.

Thus, the algorithm manages to avoid being distracted by digital noise or other false positives, and the merit is in the abundance of data that the researchers of the two universities have “fed” to artificial intelligence. In total, over 4,396 TACs were examined by a convolutional neural network, whose functioning is inspired by biological processes. Networks of this type are often used for image and video recognition, in bioinformatics and in natural language processing.

For example, artificial intelligence that uses a neural network of this type is able to generate the photo of how a pizza will come before it is cooked. In the case of diagnostics of brain bleeding using artificial intelligence, the AI ​​was instructed to examine single parts of the image instead of the entire CT scan, thus reducing the chances of false positives and incorrect assumptions based on minute changes.

Can artificial intelligence replace the human element in medical diagnostics?

Not yet. The algorithm examines a CT scan and generates a report in a second, and can help find different types of bleeding. These results, however, must always be endorsed by expert doctors, only teamwork between new instruments and professionals in the flesh can lead to saving lives, which in other scenarios could have serious complications.

For some time, Google has been involved in applying artificial intelligence to Medicine through its Medical Brain Team. The use of AI in medicine already today helps doctors save more lives, for example through deep learning: by analyzing tens of thousands of data, computers can provide better estimates and focus attention on details that can make the difference.