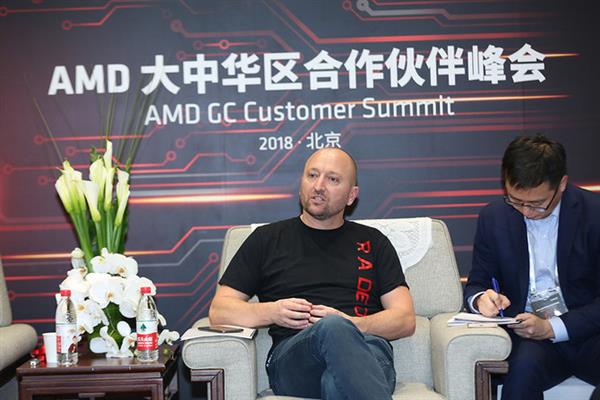 As a game player, I believe that the most important thing for all of your friends is the performance of this new RX 590 game graphics card against NVIDIA. In this regard, Scott said that the current performance of the AMD Radeon RX 590 is between the GTX 1060 and the GTX 1070 , because from the current market positioning, there is a relatively large gap between the two products.

About game consoles and PCs

The biggest difference between the two is the architecture and its update speed. The architecture of the game console is about five years ago, but today we released a new GPU with a new process, which means AMD’s OEM and ODM cooperation. Partners can already start using the latest processes for their new products, but the game console updates are not as fast.

AMD is also working with partners to strengthen the FreeSync display. It is worth mentioning that FreeSync certification will not increase the cost of the display, but it can greatly improve the phenomenon of the picture in the game, such as the tearing of the game, to enhance the game. Experience is very popular with players. AMD expects to extend FreeSync certification from desktop displays to mobile notebooks between 2019 and 2020.

“AMD has always had very close cooperation with major game makers in both hardware and software,” Scott said. “Our team for games is also expanding, over the next two to two and a half years, More people will join the game GPU business to strengthen cooperation with game developers to ensure that the new game will not only get GPU support when it goes on the market, but also promote the development of the entire game industry.

This is AMD’s vision and planning for technology in advance, and cooperation and joint research and development. Whether it is the ray tracing technology just mentioned, or FreeSync or HDR technology, AMD has already begun to prepare for several years in advance. This way AMD can not only provide a better game engine, but also make the product experience even better. At present, our team is constantly strengthening this work to ensure that after the launch of our new technology, new games can also fully use the API to call our new technology and bring out such technological advantages. ”

Microsoft is recruiting engineers for the next generation of Xbox: there will be multiple new hosts