The world has changed and the concept of money may also change in the future. Although we are experiencing a troubled time on the economic front, this change had already started some years ago. Thus, this sudden increase in the value of Bitcoin may not be strange.

According to the information, this change made cryptocurrency the best performing asset of 2020, surpassing gold, silver, and crude oil.

If the oil is increasingly falling and precious metals are being affected by the financial markets’ crisis, is Bitcoin a good investment?

Bitcoin goes up and gold goes down

As we can see, in the last four months, Bitcoin’s price has gone up by almost a third, despite a big drop in March, which has taken away more than $4,000 of its value. In the same period, gold rose only about 13%, while silver fell 14% and crude oil fell more than 70% in value.

This Bitcoin recovery takes place less than two weeks before a rare event known as halving. This is a phenomenon that will cause the number of new Bitcoins created to fall by 50%. According to analysts, such a situation could increase the value of the cryptocurrency to levels never seen before.

The halving is only the third time in Bitcoin’s 11-year history and some market analysts believe that this year the price of the cryptocurrency may reach new highs. 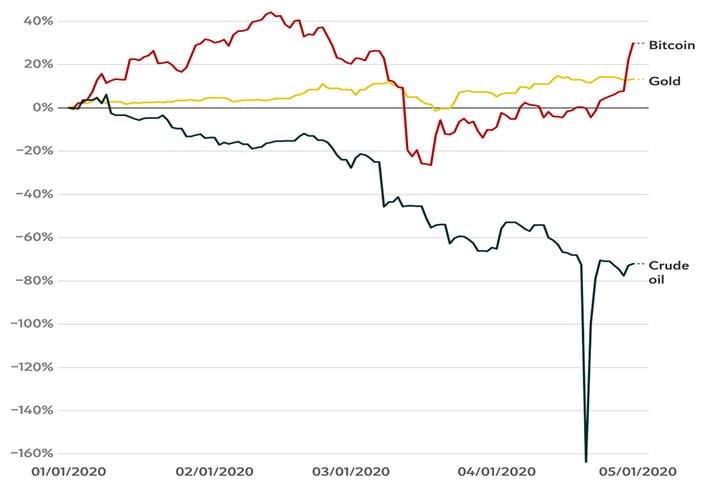 As shown, both Bitcoin and gold have seen significant gains since about mid-March, when countries around the world began to introduce blocking measures in an effort to slow the spread of the COVID-19 outbreak.

Thus, this resulted in a global economic slowdown and caused the stock markets to collapse, as investors sought to secure their holdings in safe assets.

This has been the reason why gold has traditionally performed well in times of economic uncertainty. However, market data suggests that the cryptocurrency’s finite supply means that it is increasingly being seen as a safe haven asset.

Bitcoin has been on the rise before the May event, with investors eagerly anticipating the positive impact of a tightening of supply that occurs once every four years.

In the current situation, we are in line with the 182% increase in Bitcoin since the December 2018 lows. The increase we currently see paints a picture of a rise for the months following this third halving.

In the financial crisis, will invest in Bitcoins be safe?

Looking at the situation from a broader point of view, it is said that the huge growth in the central bank and government debt relief highlights the reason why many feel the need to store their wealth in alternative assets.

Other cryptocurrencies performed even better than Bitcoin. Thus, the example of Ethereum registering gains of more than 60% since the beginning of the year.

Despite their recent gains, Bitcoin and Ethereum remain a long way from the highs of late 2017 and early 2018, when a Bitcoin was worth more than double its current value. Therefore, the question that many will ask is whether it is worth investing in gold or in Bitcoins.

Xiaomi has released 3 new MIUI 12 builds in one week