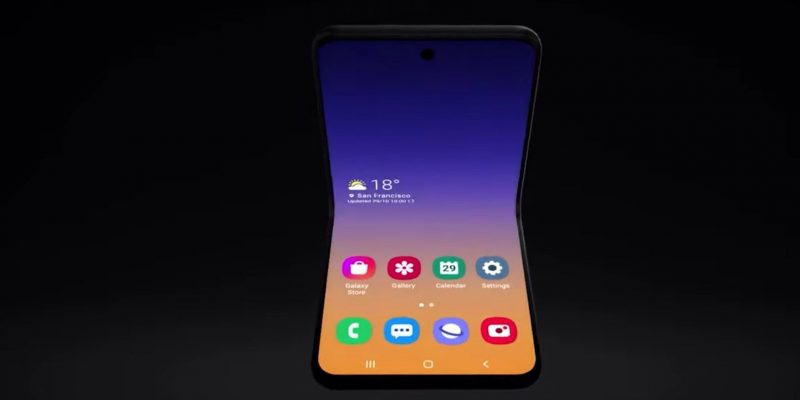 Undisputed protagonist of the event was the concept of a new folding smartphone, which could represent the successor of Samsung Galaxy Fold, recently arrived on the market after numerous delays. Unlike the current model, Samsung has opted for a different form factor, reminiscent of the old flip phones.

The 2019 edition of the Samsung Developer Conference got underway in San Jose, California and during the opening keynote the South Korean giant did not miss the juicy anticipations.

The concept shows a smartphone that folds in half on the shorter side, effectively halving the size once it is closed. This is precisely the intention of Samsung, to create a compact device that is easier to keep in your pocket, with the possibility of creating new usage scenarios. However, it is possible that the smartphone will be marketed under another name and that the successor to the current Galaxy Fold has a different form factor.

During the event Samsung also spoke of One UI 2.0, the new interface based on Android 10Samsung shows Galaxy Fold of the future, revealed novelties for Bixby and One UI 2.0, in beta on some models, which is evolving in view of the transition to new form factors, leading the user to focus more on the things that interest him.

Samsung also focused on Bixby, its digital assistant, which thanks to the Marketplace this year brought a breath of fresh air to users. Starting next year the Marketplace will grow to bring the additions proposed by third-party developers to more Samsung devices.

It’s only been two years since Bixby was born but it was enough for the Asian giant to make numerous improvements, introduce new features and make it even smarter. To show us the (short) history of Bixby’s evolution, Samsung has prepared a beautiful infographic that summarizes the highlights and milestones.

Smartwatch Moto 360 is back with Qualcomm Snapdragon, without Motorola tag