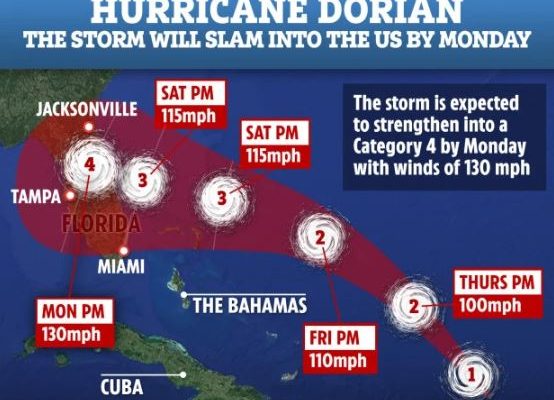 National Hurricane Center said the Cat 4 Hurricane Dorian has sustained top speed winds of 150 miles per hour there had been a change in Hurricane Dorian’s path that could overtake Florida but still threaten the southeastern United States. It could also threaten South and North Carolina, including Georgia.

According to the World News Observer, Hurricane Dorian’s path predicted by the National Hurricane Center, Dorian will hit Great Abaco in the Bahamas today, and to the Florida coast on Monday evening or early Tuesday.

The latest National Hurricane Center (NHC) advisory has Hurricane Dorian on a collision course with the northwestern Bahamas sometime today and moving near the Florida east coast late Monday into Tuesday.  Still, a Category 4 some fluctuations in intensity likely within the storm, but Dorian is expected to remain a powerful hurricane during the next few days.

Authorities in the Bahamas have appealed to residents and tourists to take shelter as time goes by before Hurricane Dorian attacks, warning that reluctance to move can be life-threatening.

The Cat 4 Hurricane Dorian with a maximum wind speed of 240 kilometers per hour, is forecast to hit the Bahamas today and bring more than 61 centimeters of rain to some places, said the US National Hurricane Center (NHC).

“Life-threatening storms and heavy rains can cause flash floods in Abaco and Grand Bahama, from Sunday to Monday,” the NHC said.

On the direct route, the violent storm headed for the southwestern islands of the Bahamas in Grand Bahama and Abaco.

“I want you to remember: the house, the structure can be replaced. Life cannot be changed,” Minnis warned.

“We ask residents along the northern coast of Grand Bahama and north and east of Abaco to move because of the storm surge up to 4.6 meters.

Existing Huawei smartwatches could be upgraded to HarmonyOS

Huawei confirms the launch of Mate 30 series: will be held in Munich on 19th September