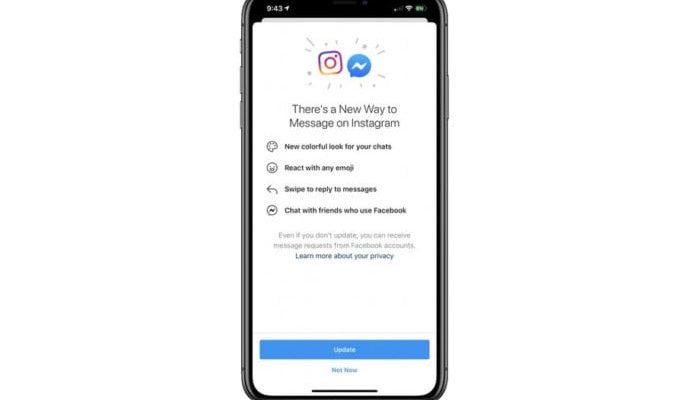 Instagram took the start in the integration of the social network photos and videos and Facebook Messenger. This Friday, the platform application for Android phones and iPhone (iOS) began to present a pop-up to users with an option to activate the feature that connects the chat tools of the two social networks.

The first traces of the feature appeared to users as soon as they opened the app. With the title “There’s a New Way to Message on Instagram” (“There is a new way to send messages on Instagram”), the notification presents the features that will be taken to the Instagram messenger, if you enable the integration.

Among the functions pointed out by the pop-up are the colored chats, the reaction with emojis, and the “drag to reply to messages” gesture, similar to WhatsApp. Users will also be able to have conversations with Facebook friends directly through Instagram. But, according to The Verge, this last feature is not yet available.

Finally, the user is exposed to two buttons at the bottom of the screen: “Update”, to enable the new functions, and “Not Now”, to not activate the integration. Also according to the specialized website, when triggering the integration, Instagram starts to display the Messenger icon on the application’s home screen, instead of the Instagram Direct symbol.

This is a piece of news expected at least since last year: in early 2019, Mark Zuckerberg confirmed plans to integrate WhatsApp, Instagram, and Messenger. “We plan to start making it possible to send messages to your contacts using any of our services and then extend that interoperability to SMS as well,” he said at the time.

In addition to Instagram, WhatsApp implemented a shortcut that takes users of the messaging app for Android, iOS, and the web version to Messenger Rooms in June 2020. The integration between the two messengers allows video calls with up to 50 people even if the participants do not have a Facebook account.

Samsung Game Launcher is updated with a couple of new features

Tired of annoying ads? Here’s how you can block almost any ads including YouTube