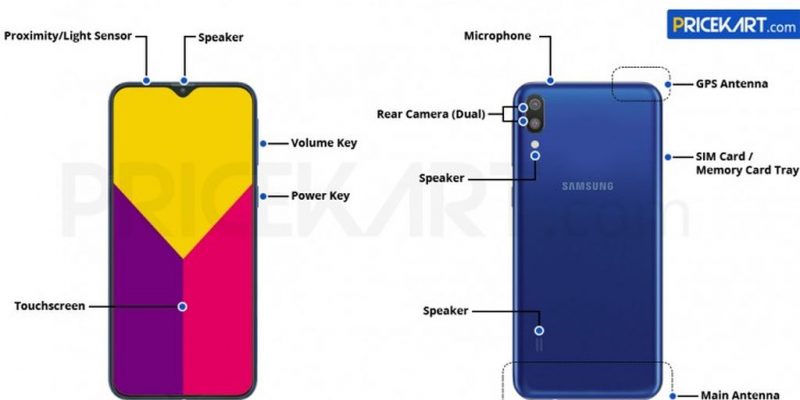 According to many rumors, the Korean electronics company is about to launch a new M-series phone line aimed at the low-end, affordable segment.

Recently the Galaxy M10 has been unintentionally fully exposed through a leaked user guide on the Internet. The image shows that this device will have a 6.2-inch screen with HD + resolution, but there is an additional area of ​​compact water droplets for use as a selfie camera. Thus, Galaxy M10 promises to be quite neat when held and parallel is a very large display area occupying almost the entire front – this design follows the current trend on Android smartphones.

In addition, the processor on the Galaxy M10 will be Exynos 7872 with 6 CPU cores (2 x Cortex A73 +4 x Coretex A53), 2 / 3GB optional RAM and 3400 mAh battery. Most likely, this machine focuses on multimedia entertainment (watching videos, browsing photos) rather than playing high-end graphics games. Galaxy M10 will have a 13MP f / 1.9 + 5MP dual camera cluster (sensor for measuring depth of field, while the selfie camera has not yet been revealed.

Galaxy M10 is expected to be introduced at the same time with other products along the M-Series on January 28th.