93% of mobile transactions blocked as fraudulent in 2019: Upstream

93 percent of total mobile transactions in 20 countries were blocked as fraudulent in 2019 according to areporton the state of malware and mobile ad fraud released today by mobile technology company,Upstream.The Invisible Digital Threatdata is based on deployments of UpstreamsSecure-Dfull-stack anti-fraud platform that detects and blocks fraudulent mobile transactions mostly originated from ad fraud malware. The platform at the end of 2019 covered 31 mobile operators in 20 countries.

In the markets examined, Upstreams security platformprocessed1.71 billionmobile transactionsand blocked1.6 billionof them asfraudulent, a staggering93 percent of total transactions. It is estimated that left unchecked these transactions would have cost users$2.1bn in unwanted charges. For the industry as a whole, losses from online, mobile and in-app advertising reached $42 billion in 2019 and are expected to reach $100 billion by 2023. 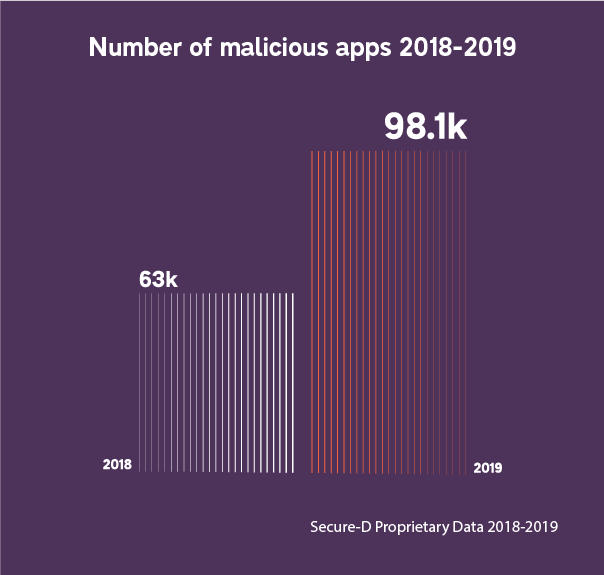 With Android devices now accounting for an estimate 75-85% of all smartphone sales worldwide[2]Android is by far the most dominant mobile operating system (OS). At the same time it is the most vulnerable due to its open nature, making it a favorite playground for fraudsters.

While, as mentioned in the Secure-D report, it is always a good rule of thumb for consumers to only download mobile applications from Googles official storefront, Google Play, thanks to its scale and set up, rogue apps are still getting through its defences. Of the top 100 most active malicious apps that were blocked in 2019,32 percent are reported still available to downloadon Google Play. A further19 percentof the worst-offending appswere previously on Google Playbut have since been removed, while the remaining 49 percent are available through third-party app stores.

Fraudsters appear to target some app categories more than others. Ironically, apps designed to make a device function better and make everyday life easier are the ones most likely to be harmful with22.32 percentof malicious apps for 2019 falling under theTools / Personalization / Productivity category[3]globally. The next most popular categories cybercriminals target are Games (18.97 percent) and Entertainment/Shopping (15.76 percent). 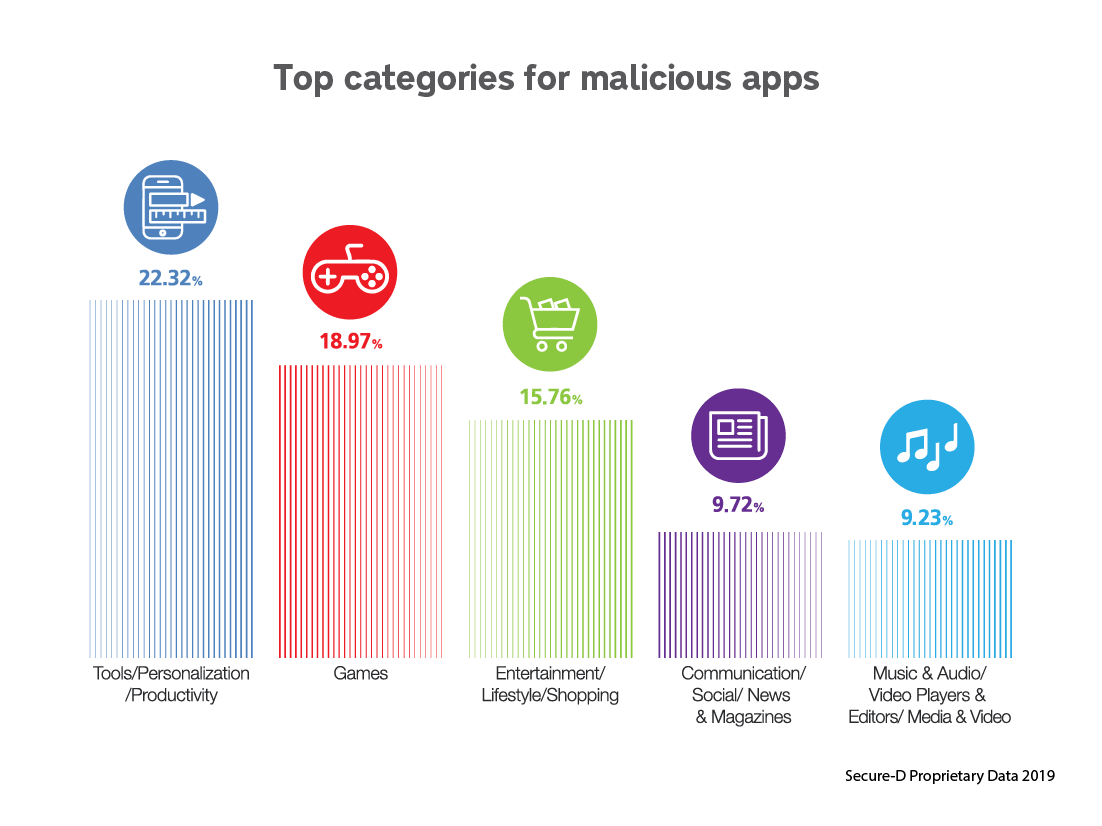 Indicating scale, in the course of only a few months in 2019, Secure-D reported on the suspicious background activity of five very popular Android apps: 4shared, a popular file-sharing app, Vidmate, a video downloader, Weather Forecast a preinstalled app on Alcatel devices, Snaptube, another video and audio app, and ai.type, an on-screen keyboard app. With a total ofnearly 700 million downloads, these were or had been at some point available on Google Play. In these five cases alone, Secure-Ddetected and blocked 353 million suspicious mobile transactions preventing $430 million in fraudulent charges.

Dimitris Maniatis, CEO of Upstream commented,Mobile ad fraud is a criminal enterprise on a massive scale. Though it may seem that it is only targeted at advertisers, it greatly affects the whole mobile ecosystem. Most importantly it adversely impacts consumers; eating up their data allowance, bringing unwanted charges, messing with the performance of their device, and even targeting and collecting their personal data. It is more than an invisible threat, it is an epidemic, calling for increased mobile security that urgently needs to rise up in the industrys priority list. Left unchecked, ad fraud will choke mobile advertising, erode trust in operators and lead to higher tariffs for users.

The effects of mobile ad fraud are particularly damaging in emerging markets where data costs are significantly higher. As evidenced from detailed data presented from five such markets including Brazil and South Africa fraud rates in most cases exceed the 90% mark. As Upstreams report highlights consumers in emerging markets are more vulnerable to digital fraud; they are unaware of the dangers as they often go online for the first time via their mobile devices and data depletion caused by malware has a much greater effect on them due to the high cost of data in their countries. In Africa 1 GB of data costs prepaid mobile subscribers the equivalent of 16 hours of work at minimum wage.

A key part of successfully tackling mobile fraud is awareness,explains Maniatis,something that the whole industry, surprisingly, lacks. With all indicators pointing that its value will grow in the hundreds of billions in the next three years, we cannot afford to remain idle. This is the main reason we steadily and openly share all our findings with the whole community.

Mobile ad fraud remains a hidden threat for most consumers. It usually goes undetected and is not high on peoples agendas when choosing apps. However, aas the industry delays its response, consumers should take steps to stay safe from mobile ad fraud in 2020. For example, by using anti-malware services like Play Protect, by only downloading from the official Play store after checking reviews carefully and keeping a close check on bills for unwanted subscriptions or charges,added Maniatis.

Download the full reportfor an in-depth look at the state and workings of mobile ad fraud including insights on five emerging markets:Brazil, Egypt, Indonesia, South Africa and Ethiopia. By way of comparison, the report also juxtaposes snapshots of the state of malware in theUnited KingdomandUSA.