TechLapse Team
10 min read Updated: Dec 22, 2022
We may receive commissions for purchases made through links on our website. We appreciate your support.

TikTok is on everyones lips and continues to record dizzying numbers, today it has more than 500 million active users per month; just to make a comparison, these are half of those active on Instagram .

TikTok quickly jumped to ninth place in the ranking of the most used social networks in the world and this year its app was the most downloaded ever on both the Play Store and the App Store.

But where does TikTok come from? How did it become so popular in just 3 years from launch? And most importantly, why are they all crazy about TikTok?

Before going into what is the use of the platform it is right to start from the origins of TikTok.

Its enormous growth is given by a succession of events that have to do withMusically(it will probably remind you of something).

Musical.ly was born in China in 2014 and was a social network created for educational purposes, useful in the context of school learning of various subjects. Later, in 2016 and always in China, TikTok was born, developed by the ByteDance company. During this period Musical.ly, which had nothing to do with TikTok, was not going through a rosy moment due to the lack of interest shown by the public towards the platform.

Due to the low attractiveness, Musical.ly later thought of changing its original essence, focusing on a younger target and giving space to short music videos in amateur playback. 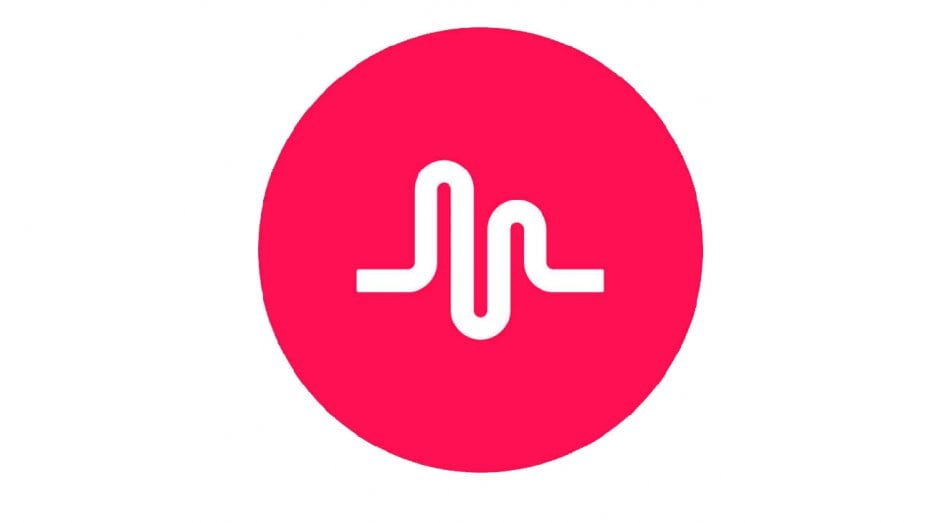 In 2017 Musical.ly was purchased by ByteDance and on August 2nd 2018 Musical.ly and TikTok merge definitively under the guidance of ByteDance. From that moment the rise of the new social network with the unique name TikTok began, seen by many as a re-brand of the original Musical.ly.

One always wondered what the main focus of TikTok was, in particular: what can you publish, what can you find, who can you find. One possible answer is: of everything and more, from the joke made to the friend, to the dubbing of a scene from a film, from remixes of songs to heroic acts.

It is a social network that targets the 13 25 age group. 49% of TikTok users are between 16 and 24 years old. This particular target has a rather high loyalty rate and companies have understood it, with the consequent unstoppable desire to identify young children and young people to offer them targeted and relevant advertising campaigns. From here originate all the complications due to the privacy and tracking of minors; TikTok has been and still is at the center of the spotlight for its still rosewater rules regarding the tracking of minors activities on the platform 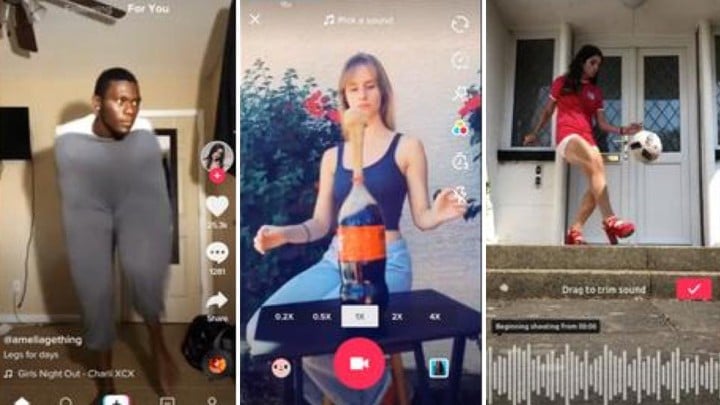 TikToks mission is to inspire creativity and bring joy, according to the textual words reported on the social site. It makes you laugh, it succeeds very well, thanks to the dementia and frivolity of most of the videos posted.

The way the mission is drawn up and how TikTok is structured, this is configured as a pure entertainment social, an end in itself, which is not able to teach anything, to add anything, if not to promote pure mental leisure.

By publishing a video, its not us for the entire duration of the movie, but a parody, a joke, a farce. And even if initially it may seem complicated to establish which video to publish (maybe you dont have a clear idea of the content to propose or you are not sure of the result), I still find the TikTok environment reassuring, because the level of frivolity is on average so high that the fear of publicly displaying an unsuccessful product almost disappears. This brings with it, however little, a sense of non-judgment on the part of the beholder towards the TikToker, given that the viewer (in good probability) will be watching our video just to relax, to have a laugh, without paying much attention to the quality and importance of the content or message transmitted.

It is not uncommon to run into the network in functional comparisons with the most popular Instagram. They certainly have similarities, but I dont think that TikTok can supplant Instagram, Facebook or YouTube in the future: the mission is different, the operation is different, target and focus also. Obviously Instagram, Facebook, Snapchat and even YouTube, could think of sweeping some TikTok features by incorporating them into their apps, to avoid the passage of users to this new platform.

We can consider TikTok as the Instagram of the videos. Only short videos between 15 and 60 seconds can be published. The peculiarity is that all the contents are accompanied by music, which can be from well-known artists and can be found directly from TikTok during the video creation phase.

In reality, photographs are also allowed, but will be presented in the form of a video photographic carousel. 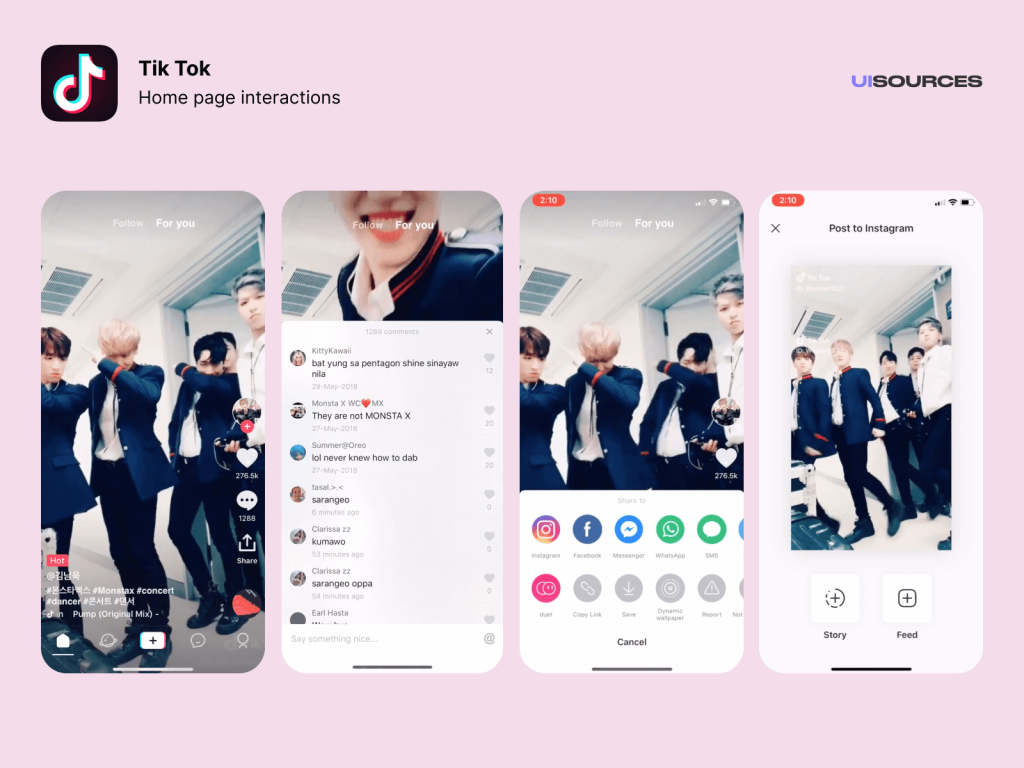 The user interface that guides us through the navigation of the entire app is simple to understand, with the video feed immediately visible when starting TikTok.The rapid scrolling between one video and another is very reminiscent of the style of presentation of Instagram stories, but with vertical scrolling.

Remaining inside the home, in the upper part of the interface there are the buttons Follow and For you.The first will upload a personalized feed based on the TikTokers followed, the second will upload a more general and useful feed to meet new TikTokers.

On the right there are other different links: the first one (starting from the top) is useful for putting the follow up to the TikTok current; the second, just below, allows us to put a heart to the video; the third opens the comments section and allows you to write a public message to the TikToker or to leave a heart to other comments already present; the fourth is a simple button for external video sharing; the fifth and final is a link to the artist of the song used for that video.

Moving to the left side we find instead a link to the profile of the TikToker, followed by a specific description and any hashtags and, immediately below, the title of the song used.

From the bottom navigation bar, we now go to the Discover section.

Here, in addition to having the ability to search for users, videos, sounds, hashtags, we will be advised of various links to further hashtags that may be of interest to us and whichTikTokrecommends us to view.

Surely TikTok is a platform destined to grow exponentially in the near future, a factor currently not fully found in other apps, given that the strong and decisive push to bring social networks to extremely high popularity levels is still missing.

Surely TikTok represents a safe place, partly free from judgment, very frivolous and aimed at very young age groups.It also certainly represents a possible and excellent opportunity for companies to advertise themselves and expand their reputation.