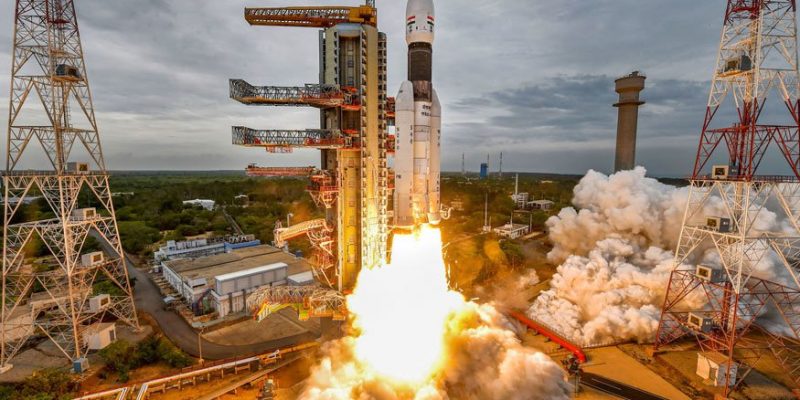 The Indian Space Research Organization (ISRO), the equivalent of NASA in India, successfully put the Chandrayaan-2 probe into lunar orbit. Next steps: the moon landing and the study of the soil of the south pole of the star.

The Chandrayaan-2 probe successfully completed its lunar orbital insertion maneuver on Tuesday at 3:32 GMT, the Indian Space Agency (ISRO) said in a statement. The expedition aims to land a lander and a mobile robot near the South Pole of the Moon, nearly 384,000 kilometers from Earth, on September 7th.

Just four weeks after launching the Sriharikota launch pad in south-east India, the Chandrayaan-2 probe has been a dangerous exercise. The probe has reached the Moon by gradually raising its orbit around the Earth until the ignition of its rocket engine for 29 minutes to switch into orbit lunar, this Tuesday.

The operation was based on a perfect balance between approach speed and a precise altitude to be maintained. A lower speed would probably have led the probe to crash on the moon’s surface, while excessive power would have led it to definitely get too far from its orbit.

Pragyan, the robot “Wisdom” in search of frozen water

But the moon landing is not yet successful: four complex maneuvers must be made before September 7 to bring Chandrayaan-2 to its final orbit, 100 kilometers above the Moon. The first of these has already been held successfully on Wednesday, August 21st. Once its circularized orbit, the lander, called Vikram, will then detach the pitcher to land on the desert floor of the star.

Vikram will lead the Pragyam robot – “Wisdom” in Sanskrit – for a series of studies in the South Pole of the Moon. This region, relatively unexplored, is of great interest to scientists because it may contain frozen water. In 2008, it was already the Indian mission Chandrayaan-1 that had proved the presence of water molecules on the lunar surface, without landing. His successor must accomplish his task on a lunar day, fourteen days on the ground.

If the mission is successful, India will become the fourth nation to put a machine on the moon, after the United States, Russia and China. The mission cost € 124 million in New Delhi, a relatively small budget for a project that would materialize India’s space ambitions. In April 2019, the Israeli probe Beresheet missed its moon landing and crashed on the surface of the moon.

Samsung opens pre-registrations for the Galaxy Fold in China