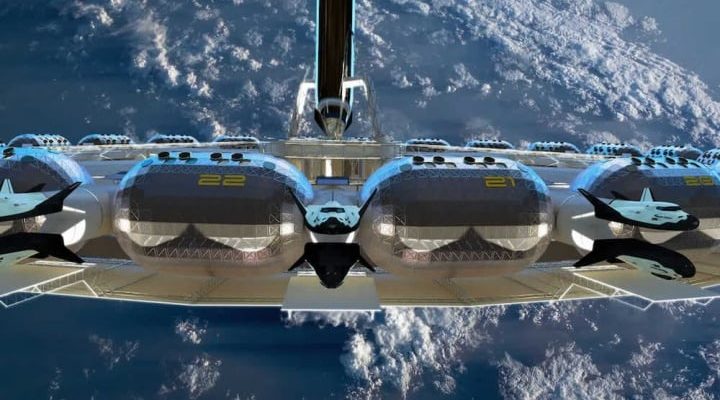 There is increasing interest in space. Today’s technology already allows travel to orbit the Earth at more economical prices, which opens up new business opportunities. In this sense it is not surprising that there are already those who consider betting on space tourism. One case that has been widely commented on is that of Gateway Foundation. It intends to launch a hotel in space by 2025.

According to the company responsible, the project aims to host up to 450 people who will be able to glimpse the Earth from space.

Hotel will be opened until the year 2025

The idea is not new, because for many years there has been talk of space tourism. Thus, such an idea moved entrepreneurs such as Elon Musk, Richard Branson or even Jeff Bezos to develop technologies for space to be “easily accessible”.

In the case of the hotel, the challenge is to build a giant space station. With a capacity of about 450 people, the facilities will have artificial gravity, luxurious suites, restaurants, gyms and everything the luxury hotels on earth offer. In addition, this station will have a peculiar design.

As shown in the project, the complex will be shaped like a giant ring and will have gravity variations. So inside, the closer to the center of the building, the lighter the person should feel.

We will have several different recreational activities and games that highlight the fact that the guest is able to do things he cannot do on earth. Because of weightlessness and reduced gravity, you may be able to jump higher, be able to lift things, be able to run in ways you cannot on Earth. – Advocated Alatorre, architect responsible for design.

The plan has already been mapped out and there have been developments. However, even though it will open in 2025, the Von Braun Space Hotel will not be fully operational until 2027.

As we all know, today’s space stations are ugly and modular (almost unfinished). However, this hotel has a curious design. According to the official, the space hotel complex is based on what was thought by Wernher Von Braun, a German engineer who was one of the leading figures in the development of the V-2 rocket in Nazi Germany and the Saturn V rocket in the United States.

The name given to the hotel was chosen after voting and the basis of the structure follows what was described 60 years ago. According to architect Alatorre, despite the fact that the base of the station is several decades old, today’s materials – including the possibility of 3D printing, make a hotel in space more likely than in past decades.

50 years after man stepped on the moon

50 years after the Apollo program has taken man to the moon, there is a growing interest in space. More and more countries are exploring the natural satellite, more and more projects to explore the lunar soil.

In addition, Mars is the other goal and was also branded by Wernher von Braun. In fact, the engineer who made the Moon Rocket, which was the rocket used in the Apollo and Skylab missions, also noted that Mars was the next goal. Thus, man has never dreamed of space exploration so much and used it as much as it does today. Only the place to sleep and rest upstairs is missing.

Huawei Assistant: Mate 30 will arrive with a personal assistant