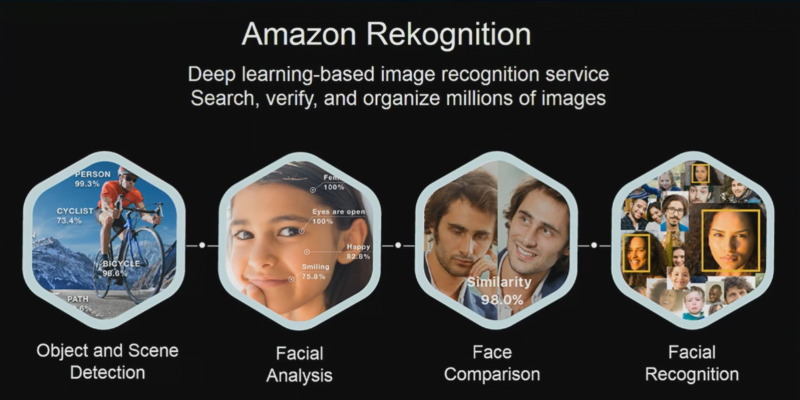 The technology of face detection has been known for years now. This domain of machine recognition of objects or human beings, however, continues to evolve with multinationals such as Amazon at the forefront. The group’s recognition API, dubbed Rekognition can now detect a new emotion “fear”.

This new contribution gives an idea of ​​what deep learning has already brought, while posing new ethical questions.

A new emotion in the program

Rekognition is part of Amazon Web Services. It is a Web application that can, from an image or a video, recognize a multitude of elements concerning human beings: sex, age group, characteristics of the face, etc. It can determine, in the case of a celebrity, who she is dealing with. The latest updates have also improved the age and added the ability to detect violent content (such as blood, weapons and corpses)

The application can also detect emotions. Amazon summarizes the feature this way:

“We improved the accuracy of emotion detection (“Joy”, “Sadness”, “Anger”, “Surprise”, “Disgust”, “Calm” and “Confusion”) and added an emotion, “Fear”. This is where the giant of e-commerce is confronted with an ethical and moral dilemma.

Detecting the face of a “calm” or “happy” person is not so much in itself. But according to Amazon, deep learning can now provide a computer with the keys to detect fear. In this case, one can imagine useful cameras to locate more quickly for example, a turning in progress. Facial recognition is always more sophisticated, it could also help find the suspect of robbery.

A debate already on the table

Such cameras do not yet exist, but the possibility for a computer to detect fear is a new step, posing once again the question of the limit between freedom and security. What will happen in the case of hacking such a system?

“This technology brings important and even exciting social benefits, but also possible drifts.”  – Brad Smith, president of Microsoft (and lawyer)

Amazon for its part, does not seem to like this opinion. For the company, the abuse remains marginal. Amazom said in a statement: “Our quality of life will be much worse if today we define technology as outlaws simply because a few people decide to abuse it. Imagine if customers could not buy a computer because it could be used for illicit purposes?”. Before adding: “Like all AWS services, we expect our customers to use them in compliance with the law, and to be responsible when using Amazon Rekognition.”