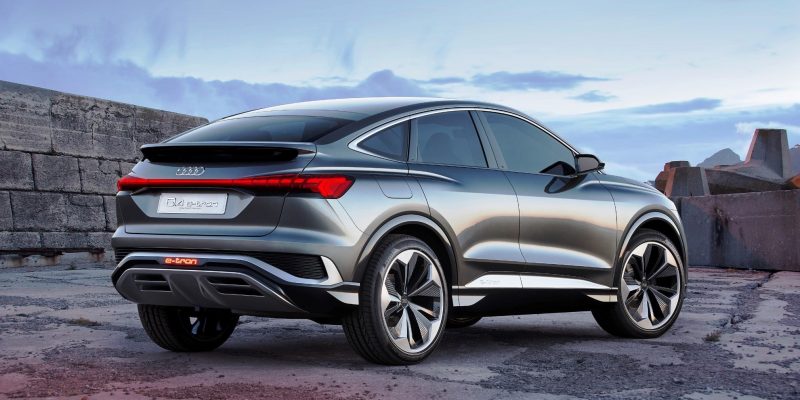 Audi Q4 e-Tron range combines the real and virtual world, for the benefit of safety and comfort. driving, thanks to the interaction between artificial intelligence, machine learning, and enhanced Car-to-X connectivity, the head-up display with the augmented reality.

The hi-tech character of Audi electric compact SUVs is underlined by the 11.6-inch MMI display, the possibility to choose after purchase between four different light signatures, and the new steering wheels equipped with touch controls with haptic feedback. The instrumentation, offered in three variants, is fully digital.

The manufacturer of the four rings draws on AR technology, raising the bar of safety, intuitiveness, and comfort of its cars thanks to the head-up display with augmented reality, making its debut with the compact electric SUVs of the Audi Q4 e-Tron range. The new head-up display projects the main information on the windscreen according to two levels: the status level, which concerns the behavior of the car, and the AR level. Warnings from assistance systems, navigation-related turn signals, and their starting and destination points are shown as AR content and displayed dynamically so that they appear as an integral part of the outside world. 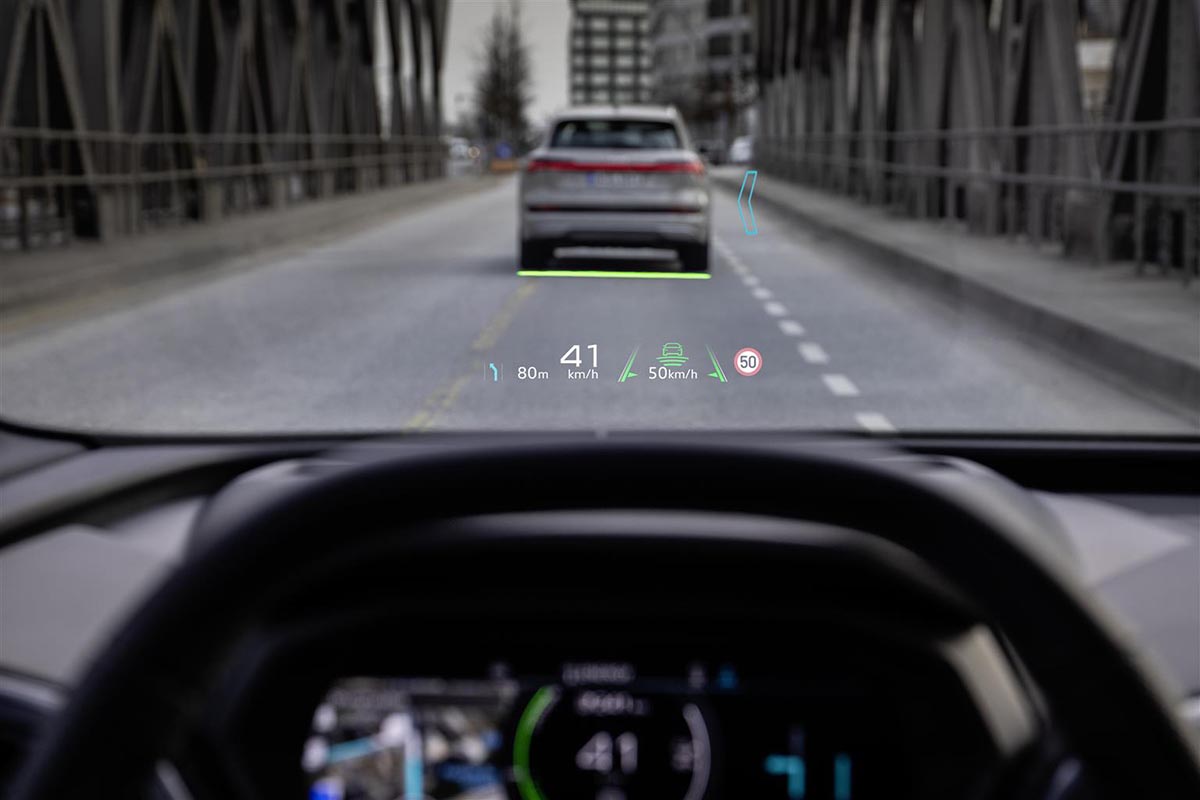 The indications belonging to virtual reality “float” at about ten meters from the driver or, depending on the driving conditions, at greater distances. The information relies on the interaction between artificial intelligence, machine learning, and Car-to-X connectivity, the latter strengthened by a data platform capable of detecting in real-time and sharing inputs on variations in road surface grip, thus to promote safety, especially in poor visibility conditions, and to allow the driver not to distract attention from the road.

The AR content display area is equivalent to a 70-inch diagonal monitor. In the lower section, as mentioned, the status information relating to the vehicle is projected, such as driving speed, road signs, and indications from the assistance and navigation systems. From a technical point of view, the heart of the augmented reality head-up display is represented by the Picture Generation Unit (PGU), located inside the dashboard.

An LCD sends the light beams to two flat-surface mirrors, while special optical elements divide the components intended for short- and long-range displays. The flat mirrors direct the light beams towards a large, electrically adjustable concave reflector. From here, the inputs reach the windshield, which displays them in the so-called eyebox, directing them towards the driver. The latter perceives the symbols with a sharpness equal to the real environment.

On the software side, the device called AR Creator – a calculation unit integrated by the modular infotainment platform MIB 3 – renders the symbols to be displayed at a frequency of 60 frames per second and adapts them to the geometry of the projection optics. At the same time, it establishes its positioning in the environment through multiple calculations, parameterizing the information detected by the front camera, the radar sensor, and the navigation.

The AR Creator also considers the fractions of a second that elapsed between the detection of an object by the sensors and the output of graphic contents. In this short period of time, the position of the Audi Q4 e-Tron could change, for example, due to sudden braking or imperfection of the asphalt. To ensure that the indication at the eye box is not subject to jolts or vibrations, multiple additional calculation operations are performed.

The AR Creator, thanks to the information detected by the front camera, predictively considers how the car will advance and estimates the variations in the set-up thanks to the operation of the radar, the electronic stability control (ESC), and the adjustable shock absorbers (if equipped). The output of the behavior of the car and the surrounding reality is the basis of the stabilization, in a few thousandths of a second, of the head-up display.

During navigation, the augmented reality head-up display shows a “drone”, represented by a floating arrow, which indicates the point of the route at which it will be necessary to perform a maneuver. The “drone” has a dynamic behavior: near an intersection, for example, the floating arrow announces the turn, before the next animated arrow indicates exactly the road to take. If the path subsequently becomes straight, the “drone” flies forward and disappears, only to reappear at the appropriate time before the next maneuver. The lower section of the head-up display indicates the distance to the turning point.

The head-up display with augmented reality offers support with its own optical warnings even if the driver has activated the adaptive driving assistant, able to manage the longitudinal and transverse dynamics of the car, keeping it in the middle of the lane. As soon as the Audi Q4 e-Tron approaches a dividing line without the direction indicators being activated, for example, the lane departure warning system superimposes a red line on the road markings. 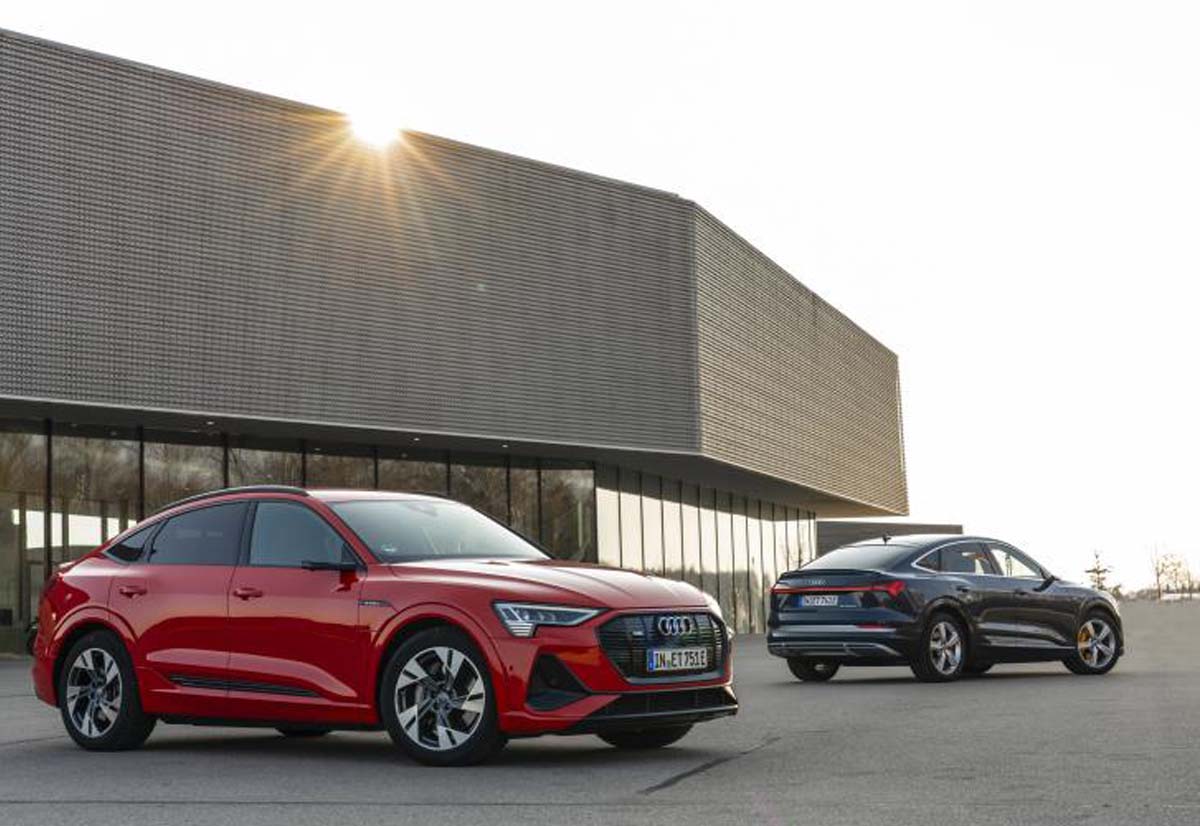 As for maintaining the distance from the vehicle in front, the head-up display marks the car in front with a colored line, so that the driver can monitor the activation of the driving aids. If the adaptive driving assistant asks the driver to show their attention, a red marker and a warning symbol appear.

Audi Q4 e-trone Audi Q4 Sportback e-Tron is referred to as the only electric native premium compact SUVs as well as the reference in the segment for interior space. A possible result from the adoption of the Volkswagen Group’s MEB electric modular platform which allows the combination of compact external dimensions with a superior category interior space.

The introduction of the head-up display with augmented reality is accompanied by the unprecedented 11.6-inch MMI touch display. It features a resolution of 1,764 x 824 pixels and acoustic feedback. Available in full-screen configuration during the second half of 2021, it allows you to manage the infotainment, comfort functions, and text entry by handwriting. Voice control, in addition to the functions that can be managed via the MMI touch, recognizes commonly used expressions and, thanks to the Audi connect Navigation & Infotainment plus package, integrates onboard information from the cloud.

The muzzle is characterized by touch surfaces with a black panel look and assisted by slight haptic feedback. Similarly to smartphones, swipe movements are possible in addition to touch gestures, for example, to scroll through menus. The digital instrumentation, standard since the first trim level, in the entry-level configuration has a diagonal of 10.25 inches. The information can be managed using the steering wheel controls. The power meter, next to the speedometer, displays the power used, the battery charge level, and the interventions of the energy recovery system.

On a higher level, the Audi virtual cockpit, characterized by two different views, integrates the navigation map and the infotainment controls. Top of the range is the Audi virtual cockpit plus which offers the “classic”, “sport”, and “e-Tron” layouts; opting for the latter the PowerMeter is in the foreground. Details and prices of Audi Q4 e-Tron and Audi Q4 Sportback with augmented reality will be officially unveiled on April 14.