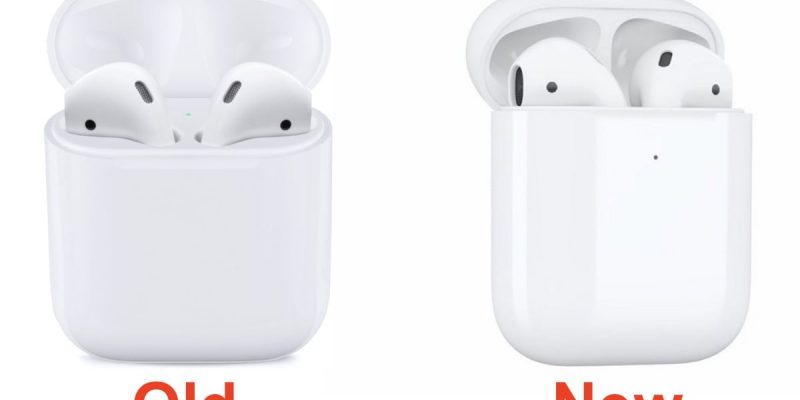 While the first buyers are happy with the improvement in sound quality, major foreign publications are already preparing reviews. Some have already shared their first impressions.

Does it make sense to be updated? What has changed significantly? Try to figure it out.

Impressions of MacRumors journalists were mixed:

These headphones are still available only in white and are still sold in the old design.

All changes to the AirPods 2 are hidden inside. In our experience, these headphones connect much faster than the original AirPods, switching between them is faster. Signal delay is reduced thanks to Bluetooth 5.0.

It seemed to us that the AirPods 2 sounded a bit better, especially at high volume.

There is a new feature “Hi, Siri”, which allows you to activate the voice assistant without hands, and when talking on the phone, the battery life is now three hours instead of two.

The main difference between AirPods 2 and AirPods 1 is a case for wireless charging. It allows you to use any BZU based on Qi.

AirPods 1 and AirPods 2 are not interchangeable headphones: if you try to use the first-generation AirPod with the second-generation AirPod in the same case, it will flash red. They are incompatible with each other.

There is no real way to visually distinguish both versions of the headphones. Only if you connect them to your iPhone.

You can see what version you have through Settings -> General -> About this device , scrolling down to the AirPods section. The new charging case differs from the old one only by the LED indicator, which is now outside.

“We would not buy these headphones.”

Resource AppleInsider appreciated the novelty, but highlighted some incomprehensible points:

They are really better than the first generation, but this is not a reason for updating.

AirPods 2 is noticeably louder. They bring us closer to the idea of ​​the author. The sound is richer and possibly brighter. You can even hear the performer breathing while listening, which cannot be done on the first generation.

A nice innovation : when the headphones are in a case, the charge of each element of the set is shown.

If you already have old AirPods attached to your smartphone, signature #2 will be added to the name of the new ones.

Ink management has not changed. You can still configure 4 different tapes: pause / play, next track, previous track and Siri.

The only way to distinguish the new wireless charging case from the old one is to position the charge indicator. The new one has it in front, it is lit in orange when you put it on Qi-supported devices.

The best solution now is to stay on the old AirPods , but if you need wireless charging, you can simply purchase a new case separately.

“Apple does not solve the problems of the original headphones, but simply modifies the functions that work so well.”

TechRadar experts are not yet ready to render the final verdict. But they liked the headphones first:

The H1 chip allows AirPods 2 to use the “Hi, Siri” function. This means that you can use the voice assistant directly from the headphones, without having to pull out the iPhone.

We noticed that this feature works very well, and the built-in microphone is great for voice transmission even in noisy environments.

As for sound quality, nothing has changed between the original AirPods and the second generation model. We were impressed with the cleanliness of the vocals, but at the same time we were a little discouraged by the bass processing. Treble sometimes sounded harsh.

New AirPods do not seem to be a significant improvement over their predecessors.

“Wireless charging doesn’t work very fast, but it may not be the headphone case that’s to blame”

The case for wireless charging is heavier than usual, since it contains the necessary components for Qi-charging.

The hinge on the back side has also changed a little – it has become more specular than in the first generation. But don’t worry, clicking the case is just as cool as the first AirPods.

Pretty silly is that there is no indication of battery charging at 100%. You can check the charge level only through the device to which the headphones are connected.

In addition, AirPods 2 significantly heat up when they lie on the BZU. As for the charging speed, here’s the result: added 8% every 10 minutes. Performance may vary depending on which rug you use.

This function is certainly convenient, but it is clearly not worth the extra $ 40 that is being asked for. If you don’t need wireless charging in principle, get a regular version of the AirPods 2 with a classic case.

I chose such a case only because of the potential possibility of charging on AirPower, but something tells me that I will not wait for it.

For those with the first generation AirPods, I advise you to wait for the final “death” of the battery. Only then can you go for new headphones.

REVIEWS OF THE FIRST OWNERS OF AIRPODS 2

I don’t like the new air pods 2, it’s sound Exactly the same as my old air pods. If you have the air pods 1 keep them. There’s no big difference between them. Except “hey Siri” and charging case.

Airpods 2 is $40 more than the first Airpods. All they changed about them, is now they support Siri, and the case has wireless charging. They did not change anything else. Not even sound quality. It should be called Airpods 1.0.0.1 because these features are bare minimum.

So, the new AirPods (2) have a passive background static sound…all the time. In the background of all music and if there’s nothing playing too. Similar to how the first one used high pitch sound for sync, but constant.

Judging by the first early reviews, the AirPods 2 is somehow different from the first generation. But they can not be called some kind of global update.

Actually, the support of “Hi, Siri” was added, the headphones became a little louder and more pleasant to sound. Plus wireless charging. However, this is not a reason to upgrade from old AirPods. Buy as the first such accessory from Apple is possible, but no more.

Want something new, having the first generation of “airpods”? Take the case with wireless charging. Or sell the old profitable.

Sony is working on a smartphone Xperia 2: another flagship company with a snapdragon 855 chip